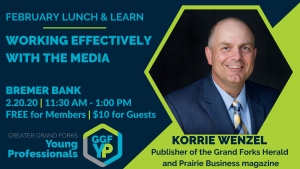 Korrie Wenzel has been involved in newspapers in one way or another for nearly his entire life.

When he was born, his dad was a sports reporter for a daily newspaper in Huron, S.D. His parents later owned the True Dakotan, the weekly newspaper in his hometown of Wessington Springs, S.D. They recently retired after more than 30 years at the paper.

His first paying job was as a 12-year-old carrier for The Daily Republic, in Mitchell, S.D.

After college, he landed a full-time job at The Daily Republic in 1991, working his way up from sports reporter to sports editor, to assistant managing editor and, in 2005, to editor.

In 2010, he was promoted to the position of publisher of The Daily Republic.

And in 2014, Wenzel was named publisher of the Grand Forks Herald and Prairie Business magazine.

He and his wife, Cheryl, have two grown sons.